Recently I took the regex course at executeprogram.com. Awesome stuff.

As you know, as soon as you have a slight idea what regex is, you try to use it everywhere. Yesterday I needed to change all strings of double values in a JSON into double values. For example I wanted to replace "1.23" with 1.23.

If you don’t know regular expressions but still need more than just replace a simple string with another simple string, Xcode has you covered.

As an example lets say we’d like to change all the properties in the following struct into optionals:

We activate search with ⌘-f. In the search bar is a plus sign. When you click it, you can select different elements to search for. The patterns we need is let Word: Word. The matching substrings are highlighted in the editor: 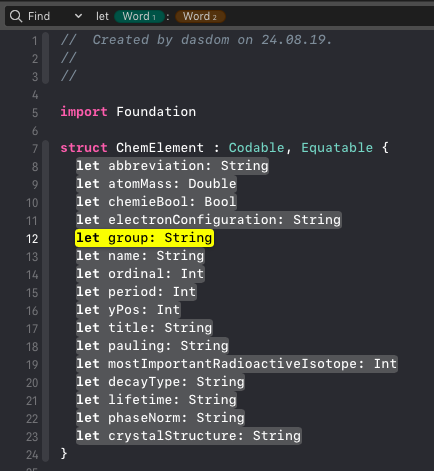 If you look closely you can see there is a small number next to the pattern elements:

In the Replace text field you can refer to the different matches using a $ sign and the number next to the pattern part like this: var $1: $2?. In Xcode this looks like this:

When we now click the All button, all the properties are changed into optional properties:

If you know regular expressions you can activate it in search by clicking the drop down that shows Contains and change it into Regular Expression:

Than you can use regular expressions when searching: 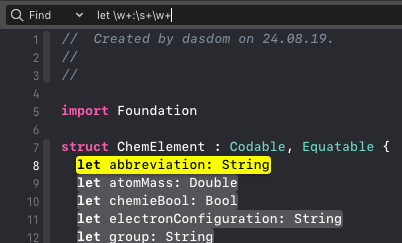 If you have comments about this or in case I missed something, you can find me on Twitter.